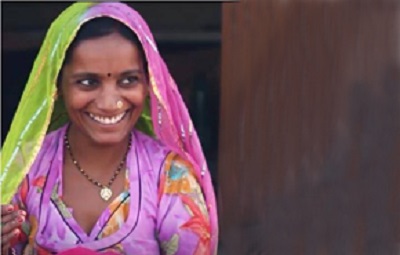 Mohini is a young achiever of the village. She is adept at stitching and has won numerous prizes. One such award also led her to Mumbai to meet Priyanka Chopra with whom she shared stories of life in her village, the hardworking women around her, the training and work they undergo and the lack of facilities. While she is working with Usha Company, she still works with kashida in Urmul’s IGP. Having learnt kashida from mother and grandmother, and despite being very proficient on the tailoring machine, she says she will be passing this intricate tradition to her daughter and the generations to come. With her youthful energy and quick thinking, Mohini mobilizes many women in her village and inspires them to work and become independent. She shares some of their recent travels for training and skill exchange across the country.

“We recently went to Ahmedabad, ten of us. We had gone to meet the Okhai people and work on samples. We also went to a design college in UP. The girls who were students knew the work on leather, but they found it difficult to do kashida on fabric. So, they taught us working with leather and we taught them working with fabric. They were finding the fabric too thin and we found leather very hard and thick. So, we worked with each other and helped each other learn the techniques, and it was a great collaboration.”

“Earlier, women would never go ten kilometers on their own. Now they travel upto Bikaner on their own. This change has only been made possible because of Urmul. We never went outside except for work or trainings with Urmul, that’s how this whole journey began of being confident to move out alone, travel alone, work and take care of ourselves. Because of Urmul, even our families began trusting us and stopped fearing the worst. Girls at the age of 16-17 are going for trainings along with the older women. The families have built trust at multiple levels, firstly they trust Urmul, then they trust the women who’re taking them, and then the young girls. And even if we stayed for longer, such as 15 to 30 days, we’ve never ever faced any issues in our stay, our work, our training, everything has been fairly smooth.” 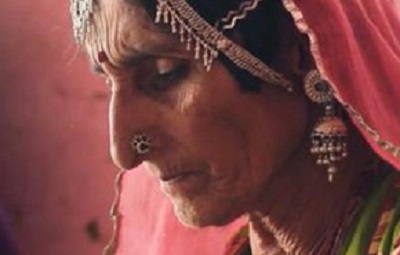 Parubai, 58 years old, crossed the border as a ten year old laden on a camel with two siblings and bundles of basic material her family had carried hurriedly; her father, mother, grandmother, grandfather, walked afoot for what she recalls as a 15 hours journey from Bahawalpur into the Thar desert in India. Her family’s main occupation was farming and animal husbandry, but she says they left their cows and goats there to rush towards India when they came to know the border had opened for a brief period.

She says that communities like hers, that belong to a lower class and are a religious minority were being harassed by both the common folk and the police. Parubai was one of the 90,000 people who left their homes in Pakistan in 1971 in hopes that on this side of the border, they would feel safe and at home. But life was equally tough here, as the land they had arrived in was not capable of supporting livelihood. These memories still cause her shivers, “There was no water. Life was tough. The PWD was doing some construction work in these areas back then. We would go to them and beg for work. On some days we would manage fourteen rupees a day through labour work at these sites, but it wasn’t enough for us to feed our families. So we would be at their feet to even give us meals and water. I remember, on many days when there was neither work nor food, our children and I survived on khejri berries.” Parubai has shown immense strength and persistence. She has been at the forefront of the Kashida work with IGP at Dandkalan for two decades, and has made many other girls and women who were her peers join this local movement. From supervision of all orders as the village-vyavasthapak (co-ordinator), to being the matriarch at home raising children, grandchildren while facing the toughest times in life, she is a woman of courage and true resilience. 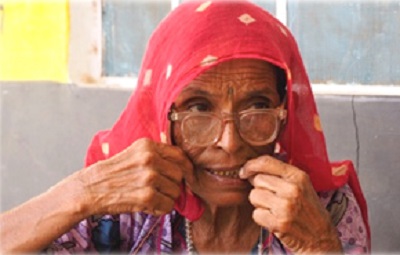 Taari Bai frowns through her spectacles, as she tries to thread the needle. Embroidery is second nature to her, despite having difficulty in seeing the thread. ‘I don’t remember’, is her response when asked about her age. She does remember crossing into India from Pakistan during the 1971 Indo-Pak war. After getting married, Taari Bai had 3 sons. Two of her sons passed away soon after her husband’s death. This meant that the only earning member of the household was no more. This put Taari Bai in a precarious situation and she was left completely helpless.

Not the one to give up, she took the responsibility of taking care of herself and her only child alive by working in the fields and refining her art of embroidery to earn a living of this.

During this phase of her life, she found herself with the opportunity of learning Kashida with Urmul and exploring the possibility of added income to help her get by. She took up the opportunity and has now been associated with Urmul for more than 15 years. Her son is a farmer and has also opened up a General store. Taari Bai has skilled up her work over the years and now is a major worker with Urmul. She has also been able to inspire her daughter-in-law to learn embroidery and help her out with the work.

Enter your email to stay in the loop on new collections, pop-up shops, in store suprises, and more.