Long before industrialisation took over production processes in the subcontinent, artisans were the backbone of the Indian economy. Traditional handicraft practices were not just occupational in nature, but also a way of respecting and sustaining the community’s heritage structure. Urmul’s role among the artisan communities of rural Western Rajasthan has been that of revival and sustenance. Tapping on to the traditional handicraft methods of the region, Urmul has; on one hand revived practices that were independent of industrial and technological advancement; and on the other hand helped build respectful livelihood options for those alienated by modernisation.

In Phalodi near Jodhpur, traditional pit loom weaving practices that had been lying dormant for a while was revived. The weaving communities were brought together to use their traditional knowledge systems in order to build an identity for themselves, overcome challenges of caste hierarchies, and gain marketability for their products. Similarly, Urmul Seemant worked among refugee communities settled around the borders of Pakistan to create a livelihood for the women out of the traditional embroidery techniques that were known to them. Through the intervention of the organization, these same practices were brought out into the market, making them relevant in today’s time and space.

Spinning nature out of mere thread and beads, this form of embroidery is famed to be authentic to the hilly lands of Jammu and Kashmir. Little known, though, is that Kashida is an everyday household activity among most communities of North West India, now in Pakistan. Through intrinsic needlework, they produce nature motifs, as seen in their surroundings on exquisite kurtis, sarees, dresses, cushion and bed covers 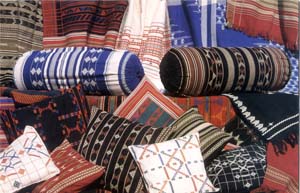 Western Rajasthan, particularly Jaisalmer, Barmer and the surrounding villages specialise in this form of weaving. Large quantities of yarn are worked upon a hand operated loom set on the ground. Previously the method was employed to produce special shawls known as Pattu, but overtime pit loom weaving is also being used to create bags and kurtis. 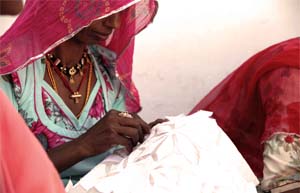 This unique crafts technique is made popular by the nomadic and semi-nomadic camel herder communities of Rajasthan and Gujarat. Through ornamental needle work, pieces of fabric shaped into popular desert motifs are sewn into a base cloth which are then crafted to produce bed covers, sarees, kurtis and the like. 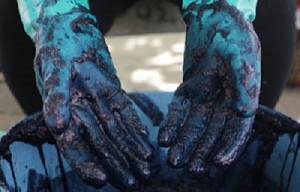 The technique of tying up parts of cloth with thread and then dipping them into tubs of colour is considered to be one of the oldest methods of decorating textiles in India. Popularly known as Bandhani or Bandhej, the signature Rajasthani artwork has over centuries modernised to be applied to both traditional attires like lehengas and sarees as well as urban outfits such as dresses and kurtis. 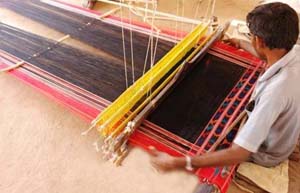 This technique involves inserting an additional weft onto the ground cloth at intervals to make decorative patterns. It’s also traditionally referred as Pattu weaving. The parts of the weft wherein the pattern is to be created, are set up on separate shafts so that the extra-weft can be weaved seamlessly and independently from the ground cloth. The more complicated the design, the more shafts are needed. 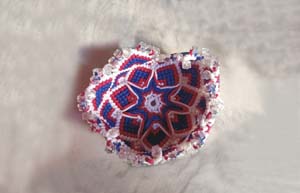 This is a kind of textile produced using knotting techniques such as the square (or reef) knot, combinations of half hitches and so on. It serves as a beautiful way to ornament or cover anything from bottles to tabletops to wall hangings. Many handcrafted wall hangings, covers for kajal holders and so on ornament local houses in Rajasthan. 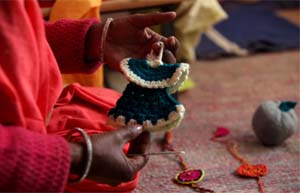 This is a process of creating textiles by interlocking loops of yarn, thread, or strands of other materials over a crochet hook. What differentiates crochet from knitting is that each stitch is completed before the next one is begun. In knitting techniques, many stitches remain open at a time.

Enter your email to stay in the loop on new collections, pop-up shops, in store suprises, and more.